A behind-the-scenes look inside the historic case to overturn California's ban on same-sex marriage. The high-profile trial first makes headlines with the unlikely pairing of Ted Olson and David Boies, political foes who last faced off as opposing attorneys in Bush v. Gore. The film also follows the plaintiffs, two gay couples who find their families at the center of the same-sex marriage controversy. Five years in the making, this is the story of how they took the first federal marriage equality lawsuit to the U.S. Supreme Court.

Following the showing of the film, we will be having a community panel with lawyers from the two pending Florida marriage equality cases (Elizabeth Schwartz, Esq. and Daniel Tilley, Esq.), along with plaintiffs Richard Milstein and Eric Hankin from one of the cases, discussing the status of those cases and the prospects for success. This is an issue of great importance to our community and we urge you to attend the film and the forum. This forum will be interactive and the audience will have an opportunity to ask questions of the panel. This film and forum event is being supported by HBO, Miami-Dade Gay and Lesbian Lawyers Association, SAVE, Equality Florida and the ACLU. 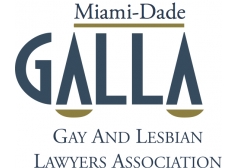